The time has come for me to explain why .:Soul:. had to make such a quick and nearly without warning move to a new sim, from where it and I had resided for over 5 years.

Speaking plainly, very poor and greedy management by the landholding company I had been renting from for the past 5 years.

Now, I should also note some history, I’ve been on Imagine Isla for closer to seven years, but the first company that owned and rented it to me sold it to RGF around 5 years ago. About two years ago, I also had a homestead sim named Faladria moved in next door, held it for about a year, then let it go thinking that they would either let it dissolve into the LL nethers, or move it away to rent out. Instead, they simply rented it again and again to other people, leaving my Private Estate… not very private at all. (A certain issue with some irresponsible Goreans trying to capture my customers comes to mind.)

As a result, I ended up renting it again to avoid… nasty neighbors. (Don’t judge, we’ve all had them at least once.)

After several more months of renting it, I asked about having it moved away from my sim so I could let it go, and they could rent it out without Imagine Isla or Faladria having any neighbors. They refused, stating I would need to pay the $45,000L fee to have it moved. Now… Here is the snippet from the LL website showing the fees for moving a sim.

And here is how much $45,000L would be to buy… FAR more than what they would be charged.

Well, I decided that I needed to save up that money, so it would take me some time, because I did not want to have to worry about neighbors, and couldn’t afford that right away anyway. I bring this up because it is mentioned in the Email further down.

Then the big day came and we all (I hope) heard the big news of the impending Prim Increase! WHOO!!! Extra plants, shops, vendors, couches, and trees spun in every land owners heads! We will be able to do SO MUCH with it!

Then, like a few others I’ve spoken to, I received a notecard from RGF.

Linden Labs has approved the implementation of more prims per region, which applies to the 65536 sqm regions. The total amount of prims on full prim regions will be increased as well as the Homestead regions.

Due to the rising cost of maintaining our regions in SL, we too must raise our prices. We’ve discovered a number of regions which are priced below our own break even point and found your name as renter for it.

We realize that you have been patrons with RGF for a long time. Understand that what we do is out of necessity, so that we can continue to serve and give you the service that you have been given over the years. RGF thanks you for your understanding in this matter.

Please be aware that we are here for you and can be reached at our Headquarters on Huginn Songr, or you can speak with Rich at: Learnavatar@gmail.com and or if you have Skype you can email Rich and he will be happy to speak with you via Skype.

Wait… I pay more than that! So I contacted the RGF Rep that sent me the notecard. I will not provide her name, since she was very polite, and only doing her job.

RGF CSR: User not online – message will be stored and delivered later.

.:Charlie ZombieBob:. (Lerochelle Destiny): lol I was trying to see if you were on to ask a question about the nc you sent me

.:Charlie ZombieBob:. (Lerochelle Destiny): it seems the homestead sim I have price went up, but the full sim price hasn’t changed yet.

RGF CSR: both have gone up

.:Charlie ZombieBob:. (Lerochelle Destiny): nope the full sim was supposed to go down according to your nc

RGF CSR: not below that

.:Charlie ZombieBob:. (Lerochelle Destiny): yeah I have been paying more than 17,088 all along

RGF CSR: yes so same then

.:Charlie ZombieBob:. (Lerochelle Destiny): what I am confused about is that the added prims thing isn’t going to raise sim tier prices for anyone unless the extra 10K prims is added on for a monthly fee. Is that what is happening? if so, it still won’t happen for about two months

RGF CSR: see from what i know

RGF CSR: all sims full sims lower than 17088 will come to that

RGF CSR: since u already pay that i don’t think any change

.:Charlie ZombieBob:. (Lerochelle Destiny): right but what about those like me paying 17988 per week?

.:Charlie ZombieBob:. (Lerochelle Destiny): and actually now the FS has gone up in the past few hours, by 11L

RGF CSR: ok i would suggest leave an nc with lorac or send email to rich :))

RGF CSR: have a good evening

.:Charlie ZombieBob:. (Lerochelle Destiny): you too

RGF CSR: hope u get your queries answered soon

Oh boy! I get to talk to the head guy, Rich Grainger! 😀

(Yes I know the email was in the notecard. Let me feel a little special about this. Also to note, all prices are stated in per/week basis, unless it’s a one time fee.)

Hiya! I just received the note card notifying me of my rental rates rising due to the added free prims that LL will be implementing in a few months. According to the notecard, my Homestead sim will (and has) gone up to L$6688/week, and the Fullsim that I’ve been currently paying L$17,988/Week for will change to L$17,088/week, however, the price has risen to L$17,999/week instead of lowering like the notecard said it would.

I am wondering why my prices are rising for a full sim when the notecard said otherwise?

I have also been quoted over L$45,000 fee to move the homestead sim away from my full sim, which is at least 3 times the fee LL charges.

Below and attached you will find the copied notecard sent to me by Xtacy and a screenshot of my current STX payment fees.

Thank you for your time and consideration in this matter and I look forward to hearing from you and coming to a reasonable understanding.

(I also included a copy of the notecard at the end.)

To: Charlie of Soul

Sorry for the confusing notecard.

The tiers will only go up for those below that rate, those above will remain the same.

The fee for moving is so high because we often must move the region again after the resident leaves.

The expense the notecard is referring to was the buydown:

The increase in tier will help offset some of this cost already paid to LL for your region.

And that, was the end of that. I did not think that that response warranted any further commenting by me.

So, as a long standing renter of over 5 years without being late, or missing a payment, (I’m always at least 1 week ahead, just in case!) I am forced to pay a HIGHER PRICE than anyone else coming in and renting because… I am supposed to pay for the BuyDown fees? The fees I never opted into and serve me in no way at all? The fees that lower THEIR payments for the sims I RENT, but without lowering mine? All I wanted was to pay the same amount that everyone else paid, NOT $900L per week MORE! (The petty $11L increase was never explained.)

Also the moving fee, I’d already paid it once before to have the sim move next to my sim, if it is so high because it covers them moving it back, why was moving it back not included for me too?

So while the notecard talks about the tier increase due to the prim increase… the final word on why it is happening is because they are making the renters pay for the BuyDown fees, rather than calling it an investment and rolling it off as a deduction come tax season. (Who says they won’t do that anyway?)

Yes I am pissed that I just had to leave my home in SL of seven years because of this. But here and in this post is where I bury the hatchet and try to move on. (I’m a Scorpio, this will be easier said than done!) I write this not to badmouth anyone, just to simply put all the facts I have out there and let you, the readers decide.

Nonetheless, I am very pleased with my new homestead sim with Lorena Chung Estates! Many thanks to those of you that helped me find them, and offered up MANY more Real Estate companies that are NOT raising their prices due to the Linden Prim Increase, or any other reason at all.

On a somewhat related note:

Some have found they are banned from the new home of .:Soul:. and, if you find you are, please send me an IM! I hardly ban, and never without major cause or reason. So it is probably a leftover from the previous owners and I will fix it A.S.A.P.

So yeah, crappy things happened, .:Soul:. has moved, Stop by and see us sometime!

Imagine Isla was taken back today and set up for renting. They didn’t return all of my items, or change the terrain textures either. 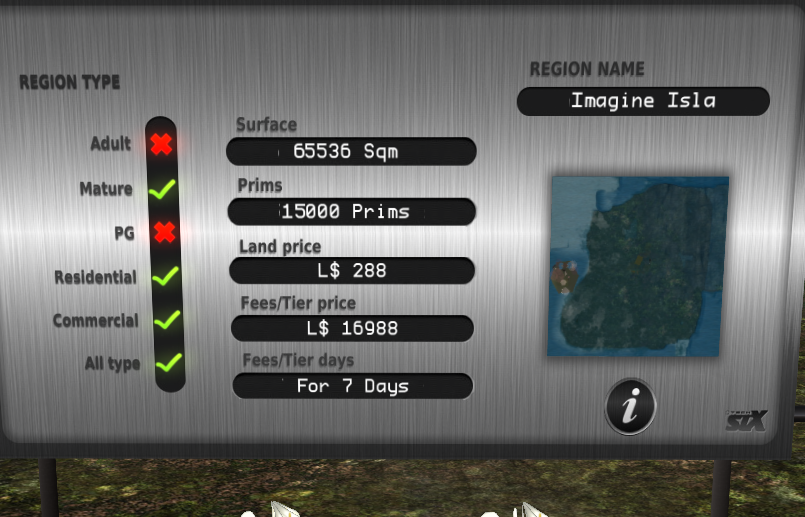 Look at that price! 2k LESS than what they had me paying BEFORE the price hike!